The detection of compounds containing chlorine in water is leading to increasing discussions. Perchlorate has been detected in groundwater since the 1950s. According to newer studies, chlorate in drinking water seems to originate from water processing methods that involve the use of various chlorination agents.

At ifp chlorate and perchlorate are detected by means of the QuPPe method (Quick Polar Pesticides Method) and by means of LC-MS/MS.

In December 2014 CVUA Stuttgart (Chemical and Veterinary Investigation Office) had found significant concentrations of chlorate in drinking water. The German government agency had analysed a total of 109 drinking water samples for chlorate (half of them a cross-section of drinking water from various origins, half of them risk-based). Two thirds of the samples showed chlorate levels above 0.01 mg/L. In 16% of the samples the concentration was above 0.05 mg/L, almost 5 percent even exceeded 0.1 mg/L.

These findings substantiate the arguments of the food industry that chlorate is found on fruit and vegetables due to the fact that it is washed with drinking water containing chlorine. The results showed that especially water from community-owned supplies or water supply associations frequently contains chlorine, since here higher concentrations of chlorine are added for hygienic reasons. Water from long-distance supplies, by contrast, rarely contains chlorine.

So far there is no statutory limit value for chlorate in drinking water, but the World Health Organisation (WHO) has issued a preliminary guideline value of 0.7 mg/L. The ADI (allowed daily intake) of 0.01 mg per kg of body weight deduced from toxicological data by the WHO was so far also recommended as a basis for risk assessment by the German Federal Institute for Risk Assessment (BfR).

In June 2015 the European Food Safety Authority (EFSA) published a scientific report in which it deduces toxicological maximum concentrations for chlorate and evaluates the suitability of the WHO guideline value of 0.7 mg/L. With regard to chronic risk, the EFSA deduced a maximum tolerable daily intake (TDI) of 0.003 mg/kg body weight (bw) and day (d), with regard to acute risk, the Authority deduced an acute reference dose (ARfD) of 0.036 mg/kg bw. This implies that the WHO guideline value for drinking water (0.7 mg/L) is not sufficient to guarantee the safety of the population in the EU. According to the EU Commission and the German Ministry of Food and Agriculture (BMEL) the results of this expert report are now to be analysed in depth. Possibly an EU-wide limit value (probably < 0.7 mg/L) for drinking water will be defined that will also serve as a guideline value for maximum concentrations in food.

Increased perchlorate concentrations in water may be the result of natural occurrences in the rock and soil. However, there is reason for growing concern due to the comparatively low toxicologically relevant concentrations. Oral intake of water or food containing perchlorate represents the primary path of human exposure to perchlorate. In October 2014 the EFSA defined a tolerable daily intake quantity (TDI) of 0.3 μg/kg body weight and day. This would mean that a person weighing 75 kg who drinks 2 litres of water a day would consume 11 µg/L of perchlorate each day. 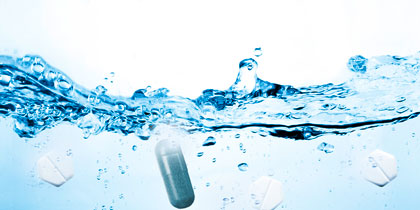