The New Genetic Revolution: what you should know about CRISPR/Cas

CRISPR/Cas9 - the acronym refers to a new procedure to modify DNA building blocks in the genetic material with previously unimaginable simplicity and precision. Food genetically modified through targeted mutagenesis falls within the scope of the provisions of EU law on genetically modified organisms (GMO). The ruling of the European Court of Justice (ECJ) of 25 July 2018 in case C-528/16 to this effect is thus a groundbreaking decision in the field of genetic engineering.

Foods that have been genetically modified, e.g. using CRISPR ‘gene-editing scissors’, are subject to the same requirements for risk assessment, approval and labelling as apply to food that was genetically modified through conventional methods. Prior to the ECJ judgment, it was not clear in law if a targeted intervention in the genetic material of plants without the insertion of foreign DNA should be regulated as strictly.

CRISPR/Cas9 is a new molecular biological method to accurately cut DNA and modify it afterwards. Today, it is possible to rewrite (‘edit’) individual genes. Such procedures, which include zinc finger nucleases or TALEN, are therefore referred to as genome editing (also: genetic editing).

CRISPR stands for Clustered Regularly Interspaced Short Palindromic Repeats; the enzyme Cas9 is a CRISPR-associated endonuclease. The CRISPR/Cas system originates from bacteria. It serves them as a kind of immune system, whereby they can detect and protect themselves against viral attacks. Just a few years ago (2012), Emmanuelle Charpentier and Jennifer A. Doudna had the brilliant idea to develop a molecular biological tool from it, which surprisingly works in all living cells - in human, animal and plant cells.

In principle, all genome editing methods proceed in three steps. First, the specific point in the genome of the target organism, where a modification is to be made, is identified and accessed with utmost accuracy. To this end, appropriate ‘guide sequences’ must be constructed, which in the CRISPR method consist of RNA segments (also referred to as ‘guide RNA’) that accurately correspond to the targeted sequence. After the sequence has docked there, the DNA double helix strand is cut exactly at this point using enzyme-based ‘scissors’ - in CRISPR, it’s the Cas9 protein, which is linked to the RNA sequence.

Afterwards, the cell’s own inherent repair systems begin to work, mending the separated DNA strand. In doing so, DNA building blocks can be removed or disabled. It is also possible to replace individual DNA building blocks or to newly insert short sequences into the DNA strand. All of this could happen in the same way during a natural, random mutation. The only difference is that here, the mutation is triggered intentionally. 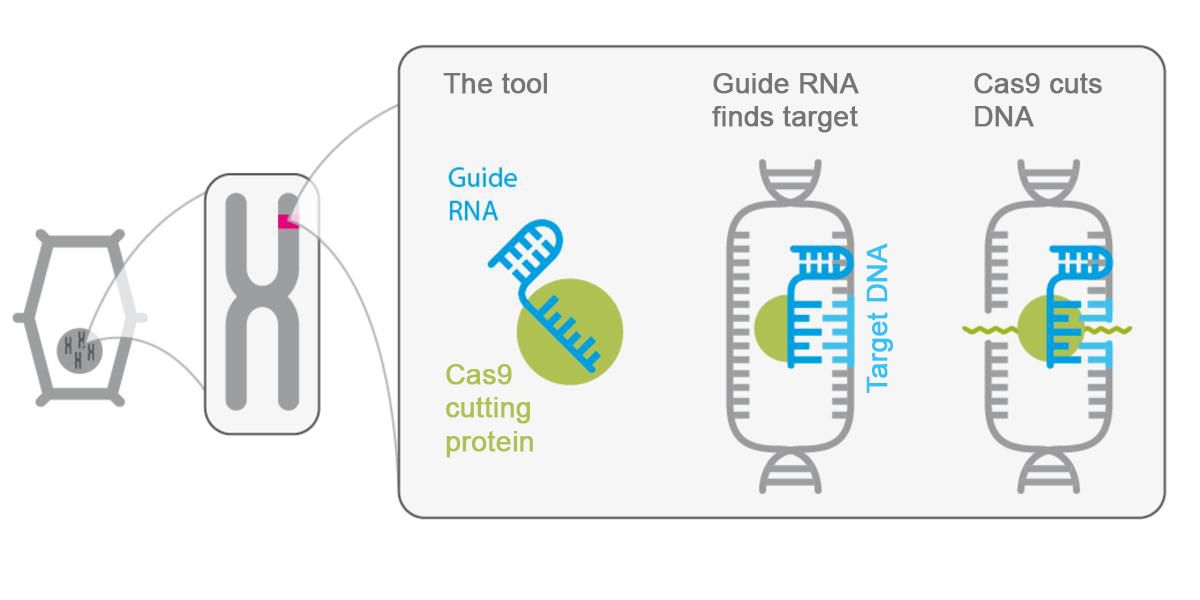 Do CRISPR and other genome editing procedures have similar risks as in genetic engineering?

In classic genetic engineering, the location in the genome of a plant where the new gene structure is to be integrated is determined randomly. Based on this consideration, critics raise a fundamental concern about genetic engineering: the untargeted integration of an ‘alien’ gene in existing gene regions may affect their functioning and thus adversely affect the characteristics of a plant. Those ‘unintended side effects’ are one of the main reasons why approval processes, including proof of their safety, are required for GM plants in nearly all parts of the world. So far, this approach, which has been practised for the last 20 years, has worked. However, the approval process for GM plants has become so time-consuming and costly that only large international companies are able to undertake it.

A ‘risk’ of accidental or unintended changes hardly exists in the case of edited plants. While it is technically possible that the CRISPR/Cas systems may cut the DNA strand in a ‘wrong’ place, many researchers were surprised at how accurately the CRISPR/Cas system functions, and how seldom such errors occur. In addition, the molecular tools - the CRISPR guide sequences and Cas protein scissors - have been further developed in the meantime, and their accuracy has improved even more.

The elements required for the editing - the CRISPR guide sequences and Cas scissor proteins - are introduced into the cell nucleus using genetic engineering methods. However, once they have fulfilled their function, they are superfluous and are discharged from the cell. Other DNA fragments, which may sometimes become necessary for inserting the editing elements, are also removed afterwards. At the end, you have a plant with minimal modifications in certain DNA building blocks. The process leaves behind no molecular traces in the plant.

If the edited section moves as part of what may equally happen during spontaneous, natural mutations, there is no rational reason to classify the product - the plant - as ‘genetically modified’. Hence, the large majority of scientists agree that under these circumstances, edited plants should be classified in the same way as conventionally cultivated plants. It would in any event hardly even be possible to monitor compliance with provisions such as special marking or cultivation-related requirements. Yet organisations critical of genetic engineering also oppose CRISPR and other genome editing methods. According to them, the classification of those plants does not depend essentially on the product, but rather on the process through which it was created - and this process is genetic engineering.

Edited plants do not require approval in the USA

By around 2021, DuPont Pioneer plans to launch a waxy maize in the USA, the starch of which will consist of 99% amylopectin - instead of only 70% - due to a gene blocked using CRISPR. Special statutory provisions will not apply to this maize. The US Department of Agriculture, USDA, declared in an official letter to DuPont Pioneer that the waxy maize did not fall within the scope of the US regulation system for genetically modified plants. After the editing of the Wx1 gene, the offspring of this maize plant would not contain any parts of the CRISPR tools. The sole difference to conventional maize was the effected mutation, i.e. the blocked Wx1 gene.

The USDA has repeatedly issued similar decisions, for example in relation to an edible mushroom developed at Pennsylvania State University, in which the gene responsible for an undesirable brown colouring was deactivated using CRISPR. Also, certain plants that have been edited using TALEN do not fall within the scope of the regulations applicable in the USA to genetically modified plants.

Even some plants developed using conventional genetic engineering methods do not fall within the scope of genetic engineering regulations according to the USDA. This affects products such as a pink pineapple, which contains newly introduced alien genes. However, as they originate from other nutritional plants and not from potential pests or pathogenic agents, the pineapple does not meet the conditions for a mandatory approval process.

In Europe, on the other hand, the 25-year old genetic engineering laws continue to apply, which means that no way around the required approval process can be expected in the near future.